Dan Ariely on how the Wellness Industry Crowdsources Reality

We recommend that everyone listen to Dan Ariely’s interview on NPR and TED talk “Why We Lie.”  It explains exactly why the Wellness Ignorati could decide to collectively self-publish an entire guidebook full of misinformation and disinformation designed specifically to increase the revenues of wellness vendors.

Here are our take-aways from Professor Ariely’s TED Talk.

Like Walter White in Breaking Bad, the Ignorati started out honest. They genuinely believed that wellness saved money and that they were doing good.   It was very counter-intuitive to believe otherwise.  If you look at page 201 of Why Nobody Believes the Numbers, you’ll see I even mildly supported biometric screens. I hadn’t done the math. I just assumed early detection was a good thing and that Ron Goetzel and others was telling the truth, for which on page 83 I professed my admiration.  As another example, ShapeUp’s CEO Rajiv Kumar would never have attacked us (largely for refusing to believe Kate Baicker, who even RAND now dismisses and who herself no longer appears to believe her own claim) if he had realized his own outcomes claims were false.

Like Walter White, it was easy to justify the first transgressions.  Since the Wellness Ignorati genuinely believed in what they were doing, when the numbers didn’t add up, they either justified to themselves that it was OK to fudge them (like ShapeUp’s now-retracted claims about Highmark) or ignored glaring invalidating mistakes. The best example of the latter: Ron Goetzel finally recanting Health Fitness Corporation’s infamous participants-vs-non-participants self-immolation after years of ignoring it.

Or wellness vendors create a parallel universe where numbers don’t have to add up (like Keas), or completely misquote industry experts saying the opposite (like Vitality).

Like Walter White, they don’t actually believe they are bad people. Ariely calls this a “personal fudge factor.” With the possible exception of Wellsteps’ Steve Aldana (who may be honest but simply unable to recognize that no matter what numbers you enter into his model you get the same answer), they really think what they are doing is OK—even though the math clearly dictates otherwise.

Also like Walter White, they kept getting drawn deeper in. The more they lied, the more they have to keep lying. They needed to continue to defend what was looking increasingly indefensible.  After giving Nebraska’s program a much-publicized and ironically named C. Everett Koop Award, it’s hard for Ron Goetzel and his committee to say “We goofed—we need to take it back because they made up the data and defrauded the state”  even after the vendor, Health Fitness Corporation, admitted it.

Like Walter White, the Wellness Ignorati “suspend reality” (to use Ariely’s term) and “buy into a new reality.”  Essentially the Ignorati crowdsource reality. They peer-review one another’s work, give themselves awards, and decide (to use Michael O’Donnell’s term) that anyone who challenges them lacks the “credentials” to do so.  Or, as Ariely says: “If you were getting well-paid by Enron, wouldn’t you want to see reality as they present it?”

Avoiding the media is an excellent strategy. Once again, like Walter White, the Wellness Ignorati want to keep a low profile. Exposure is bad if the facts all go the other way. That explains Ron Goetzel’s refusal to debate, ever, and the Ignorati’s characterization of us as name-calling bullies when all we do is ask questions.

Yep, you can read this site up, down and sideways. The fact is no names are called other than the “Wellness Ignorati.”  We’ve offered them the opportunity to propose a different name for their practice of denying facts, which they’ve declined. We do use the term “pretzel” to describe the very impressive twists and turns that Mr. Goetzel uses to wriggle out when he’s been caught calling failed or fraudulent programs “best practies” because they are run by friends, sponsors or clients. The alternative word for what one would be called when all your claims are made up is less flattering, and we’ve never used it with respect to Ron.

This explains why the Ignorati steadfastly refused to answer questions for a $1000 honorarium. Once again, like Walter White, they have so much as stake that $1000 is chicken feed. At Enron, if you questioned Ken Lay at an analyst conference, he would accuse you or not understanding their business, and cut you off from future meetings, rather than answer the question. We of course were not invited to participate in or even listen to the “discussion” about the HERO report.

Like Walter White, at some point the Wellness Ignorati needed to commit to their chosen path. The Wellness Ignorati have gone too far in their insistence that wellness saves money. There is no turning back.  The existence of this site makes turning back even harder because retracting their lies means acknowledging them. And as soon as they do that, we do what we do best other than invalidate the Ignorati’s misstatements, which is: gloat.

Like Walter White, they are now doubling down.  Examples: Ron Goetzel calling Nebraska a best practice after they admitted lying about saving the lives of cancer victims, in order to justify his original award to them. Steve Aldana can’t create a real ROI model now without admitting that his original model was not “based on every ROI study ever published” as he has maintained, but rather always yields a savings of $1359/employee no matter what inflation-adjusted figures you enter.

As the house of cards collapses, people on the fringes who were sucked in (in this case HR and some brokers and consultants) wake up and ask: “How could I have believed what these people were saying?”   Many major and mid-level figures connected with Enron did exactly this. We see this every week in wellness, as people come to us and say: “I get it. I can’t believe I fell for this.”

So thank you to Dan Ariely. In one 8-minute TED talk, he explained the entire alternative crowdsourced reality of the Wellness Ignorati – without once even mentioning them by name.  But I’m sure the Ignorati nonetheless think he bullied them.

As a hot-off-the-presses example of what Professor Ariely is talking about, Wellsteps just updated their model so that now instead of saving $1359 per person in 2019, they save $1359 per person in 2020. As with previous iterations of their model, the success of the wellness program is irrelevant to the outcome of the model. Just enter a 0% inflation rate and “1” for covered people (“1” so you can see the $1359 reveal itself without having to do division) — and then whatever figures you want to enter for spending, obesity and smoking.

Here you save $1359 without changing smoking or obesity at all: 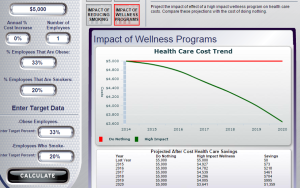 And here you saved $1359 even though there was nothing to save. The costs are as low as the model will allow you to enter (until they got caught, you could enter figures low enough that they model would calculate negative costs), and there was no smoking or obesity to reduce:

Naturally, Wellsteps is prominent both on the Koop Award Committee and the HERO Report Committee.  Wellsteps’ “back story” is here.

By whynobodybelievesthenumbers in Wellness, wellness doesn't work on May 1, 2015.
← HERO vs. Huffpost: What do actual employees say about wellness? The Greatest Danger for Your Employees? Hospitals →