Those of you with lives may not have noticed all the commotion yesterday. Wellsteps moved their post about our bullying from their own blog to Linkedin.

But then, sort of like Dukakis in his tank, once they did that, they realized that wasn’t such a good idea and took it all down, but it was too late. The problem was that on Linkedin, their rant attracted many comments from the triple-digit IQ crowd. So now, in order to find this post, you have to go to the Wellsteps blog. It is posted under: “Great Ideas from the Experts.”  Among other highlights, they said we were extorting them. Here is the source for that: we  offer $1000 and public apologies if we made a mistake in our writeups, and a $2-million reward for proving wellness breaks even, or that Boise saved money.

To them, and to all members of the Koop Committee that decided this Boise School District outcome was award-worthy, I say, “Find a mistake in my critique and collect the $1000. Or show I’m wrong about my ‘twisted facts’ and claim the reward. Instead of just criticizing me for ‘twisted facts,’ take my money. Sue me. Have me arrested for blackmail and extortion (their words). Anything. Don’t make me beg.”

This isn’t about that — postings on that topic, along with Sharon Begley’s brilliant smackdown in STATNews are easily findable elsewhere.  Instead, all we want to do today is simply add up a column of Wellsteps’ own numbers. That is how Wellsteps defines “bullying” — adding up their own numbers. In this case, it is the improvements and deteriorations, year over year, in the Boise School District’s biometrics.

I’ve already done this once, as a service to Wellsteps, but apparently they had a really bad fifth-grade math teacher. So I’m doing it again — and this time color-coding it, so even the dumbest Wellsteps executives can find someone to explain it to them.

Here is the actual screenshot of the year-over-year biometrics, from their Koop Award application. Once again, these are their figures. They often ask why we don’t publish our own studies.  We don’t have to — their numbers make our case better than we could make our own, with no “he said-she said” about whose numbers are right. So, we’ll admit it!  Their numbers below are facts — they are right!  (I guess graciously conceding that one’s adversary is correct is another form of bullying.) 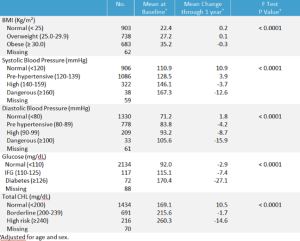 We then twisted their columns of facts into totals, below. I can send the Excel sheet on request. 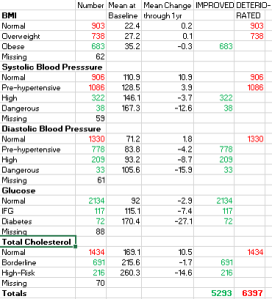 As you can see, the population deteriorated quite a bit–6397 readings got worse while 5293 improved.  Oh, and one other thing: more than 40% of the “improved” values are glucose levels declining, in employees whose glucose was already normal.   Attention, Wellsteps: there is no concept of “improving” normal glucose levels. That would be like “improving” on a 98.6 body temperature.

And who amongst us hasn’t felt draggy during a workday as our glucose falls, and eaten a snack to get our energy and productivity back? Excluding the 2134 glucose “improvements” in people who already had normal glucose, deteriorating biometrics outnumbered improving biometrics by 6397 to 3159. That’s more than 2 to 1!

We’re taking those out to be consistent with the word “normal.” Or, since we are very polite bullies, we could leave them in and stick with 6397 vs. 5293, if Wellsteps chooses.  We are happy to do the latter because we understand that in Wellsteps’ lexicon, words and phrases mean the opposite. In addition to “normal” and “bullying,” that lexicon would include “extortion,” “blackmail,” “twisted facts,” and “great ideas from the experts.”