Teaching Employees how to be Patients 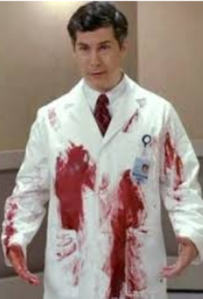 Ever visited a doctor and forgot what questions to ask? Or didn’t know? Or were too embarrassed to ask?*

If so, you’ll want to join our webinar tomorrow (Tuesday) at 1 PM EDT.  Quizzify has created a new product, Quizzify2Go, that solves those exact problems. Basically, we teach and encourage employees to be patients.

Quizzify2Go supports fifty common doctor/dentist conversations covering everything from abdominal pain to wisdom teeth with a “Cheat Sheet,” with a heading for context. Beyond that heading are 4 to 10 questions to ask.

Here is an example, for kids’ earaches: 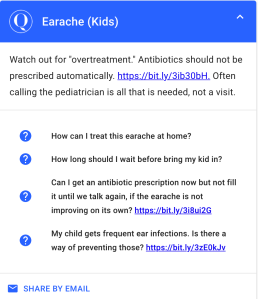 The headings and questions often come with links to authoritative sources. And you can share particular questions with friends-and-relations using the “share-by-email”feature.

Before the formal January introduction date, Quizzify2Go will be linked to and from Quizzify quizzes, and will include almost twice as many Q&A Cheat Sheets, now in the works. Quizzify2Go will be the left shoe to Quizzify’s current right shoe, quite literally bringing the Quizzify knowledge right into the doctor visit, where it would be most helpful.

Even though we know the “right answers,” most of the material is in the form of questions, in order to enhance the doctor-patient relationship rather than threaten it. As you know, doctors get annoyed when patients think they are experts on a topic because they’ve searched it. 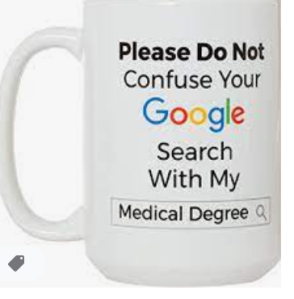 All this will be covered in our Tuesday webinar, so sign up now. Attendees will receive Quizzify2Go gratis through year-end.

*You may wonder, how does Quizzify2Go solve the problem of “feeling too embarrassed to ask”? 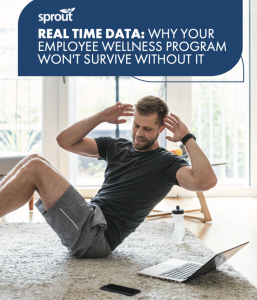 Wellness programs are designed to make employees happy whether they like it or not.

And, using that criteria, McKesson’s is the best of the best. Let’s review some of the accomplishments of McKesson’s program:

Those accomplishments naturally won them a C. Everett Koop Award, given annually to the company whose application best exemplifies the IQs of the award selection committee. It also got them some great publicity in Employee Benefits News, where they explained how weight could increase and decrease at the same time:

“Health indicators in 2013 and 2014 were adjusted in the analysis, while several sensitivity analyses of the ‘inter-individual’ impact that used a matching approach confirmed the results.”

Of course, how silly of me!  This makes perfect sense, as explained here!

Lately, though, McKesson’s award-winning program has come under fire, with horrible things being said about it:

Who is responsible for such horrible, libelous insults, insults that would make us blush?

Why, McKesson, that’s who. Apparently, one of McKesson’s divisions, Canada, didn’t get the memo that their program is good: 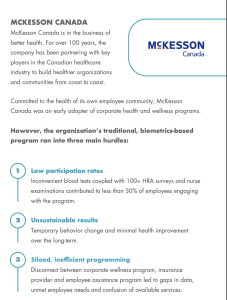 Thanks to this picture, I’m sold on them already! That’s because they’ve apparently achieved the vaunted and elusive triple aim of wellness: reducing employee costs, increasing employee productivity, and poking employee cheeks.

This is one of those “What is wrong with this picture?” pictures.  Review the caption, curiously juxtaposed with the laptop. Perhaps McKesson puts their employees on camera so the wellness coach can get REAL TIME DATA of employees doing situps because, without REAL TIME DATA, their “program won’t survive.”

This particular employee might not survive, either. Unless the coach is miked too — in which case this employee can be “coached” to move his water bottle before he impales himself on it.

Let’s dig a little bit deeper into these Sprout people, the wellness industry’s newest entrant in the competition to win the 2021 Deplorables Award, bestowed annually on the company that best reveals the IQs of their own customers.

Two things come to mind. First, to raise money, Sprout could go on Wheel of Fortune to sell their surplus vowels.

Second, speaking of coaches, perhaps they can use the proceeds from those sales to buy a coach. That coach could coach their coach to coach employees to [SPOILER ALERT–contains stupidity] stop doing situps.The 1980s called. They want their exercise back. Sit-ups are out, and have been out for years. 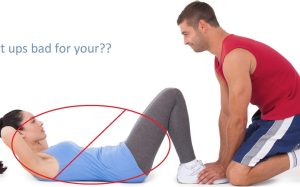 Planks, of course, are the new situps.

Second, before they brag about using “game theory,” they need to google on what game theory is:

The branch of mathematics concerned with the analysis of strategies for dealing with competitive situations where the outcome of a participant’s choice of action depends critically on the actions of other participants. Game theory has been applied to contexts in war…and biology.

Biology???  Mathematics???  The only thing biology and mathematics have in common with wellness is that Sprout knows nothing about them.  We suspect they meant “gamification,” which has about as much to do with game theory as Sprout has to do with competence.

Luckily for Sprout, unlike real industries, wellness has very little to do with competence. And wellness vendor outcome data, REAL TIME or otherwise, is invariably wrong, so unlike this poor employee about to complete perhaps his last-ever rep of his last-ever exercise, Sprout will survive.

Please post all comments on Linkedin. I’m closing this comments section in order to have them all in one place.

Can a mere vendor change your own health behaviors in an hour?

Most behavior-change vendors take months to show any impact at all anywhere in your population, so how can a vendor be so impactful, so innovative, that it can change your own health behaviors in an hour? Join our 9/28 webinar (1:00 PM EDT) and see for yourself.

We often achieve behavior change even before people sign up for Quizzify, starting with webinars like this one. One of our favorite closing lines is: “See, you haven’t even signed up yet and we’re already saving you money.”

We’ll show plenty of examples, starting with our newest and most dramatic immediate savings opportunity. [SPOILER ALERT: Reducing ER expenses by 50% or more, cash on cash.] We’ll cover categories as diverse as screenings, fusions, pregnancy, scans, and of course: Cavities.

Cavities? If you haven’t seen our cavities material, it alone is worth the price of admission. Why submit to a century-old procedure when you can get one that is $30, painless, fast and more effective? 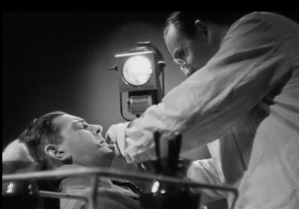 We even have a partner vendor whose own guaranteed savings increases if implemented alongside Quizzify!

In each case when we show what Quizzify teaches, we’ll do some “before and after” polling…and you can watch as the plurality of the webinar audience shifts attitudes and likely behaviors on the spot.

We’ll close by noting that you don’t even have to believe your own eyes: everything we say is 100% guaranteed.

Quizzify’s “Jeopardy-meets-health education-meets-Comedy Central” approach takes both employee engagement and cost savings to a new plateau. It’s so powerful that it simply isn’t believable unless you participate in it. Now is your chance.