First, a little background.  For those of you unfamiliar with the Wellness Council of America, or WELCOA, this organization, based in Omaha, Nebraska, was founded by the inventor of the all-you-can-eat self-serve restaurant.

Hey, it’s an honest mistake!  Anyone could misspell their founder’s name on their home page, especially when it’s one of those long foreign-sounding unpronounceable names of somebody no one’s heard of.   Besides, WELCOA in particular can’t be expected to know how to spell “Warren Buffett.”  I mean, it’s not like they’re both based in the same city or anything.

WELCOA is wellness’s perfect storm, exemplifying the standards for literacy, numeracy and integrity that have endeared the wellness industry to us humor writers.  Along with Ron Goetzel’s Koop Award Committee (chronicled at length in these pages and never shy about coming back for more), WELCOA truly does put the “Ig” in “Wellness Ignorati.”

In general, the modus operandi of the Ignorati — and especially WELCOA — is to suppress facts, because facts are their worst nightmare.  If facts are their worst nightmare, we’re their Night of the Living Dead.  We are tickled pink that we are considered so threatening that nowhere on their site is there the slightest hint that we — or any wellness skeptics — even exist.  For instance, the first time ever that the entire wellness industry (as opposed to individual debacles, like Penn State) was newsworthy enough to be covered by Health Affairs, LA Times, Incidental Economist, Chicago Sun-Times, All Things Considered, Huffpost, the Federalist etc.,  WELCOA’s lead “news” story was:  “How to Jump-Start Your Wellness Program with Big Data.”   (This editorial choice echoed the New York Post, which, on the day the hostages were freed and Reagan was inaugurated, led with “Joan and Ted to Split.”)

By contrast, we embrace transparency, and urge you to read the entire WELCOA site, especially the “premier providers,” who are kind enough to pay WELCOA for the privilege of having their creative approaches to grammar and math become TSW? fodder.  (We have a source inside WELCOA who brought our attention to the comedic potential of this material.)

One of our favorite WELCOA premier providers is Trotter Wellness, which gets its own entry in “On the (Even) Lighter Side.“.

Frankly, we’re not sure WELCOA has ever put a comma in the right place…

At the risk of ruining a joke by explaining it, it’s not just that all the punctuation is missing from the descriptor.  It’s that the exact spot WELCOA’s crack grammarians decided to place a comma is also the exact spot they shouldn’t have placed a comma, according to Trotter’s own website screenshot right above this screenshot.  That gives WELCOA both a false-positive and a false-negative rate of 100%, which even in wellness is a bit on the high side.

Along with Ron Goetzel’s Koop Committee and Health Fitness Corporation, they were a co-conspirator in the Nebraska workplace wellness fraud, thus proving that great minds aren’t the only ones that think alike.  It was actually their website that claimed the famously fictitious “life-saving catches” of the 514 victims of “early stage cancer.” 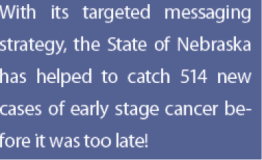 What boggles the mind, even by the uniquely gauzy ethical standards of the wellness industry is that they still make that claim, albeit on someone else’s website.  We’ll readily admit they posted the claim originally because they didn’t realize that HFC was lying (again), and that screening about 5000 people wouldn’t yield 514 cases of cancer.  (While Ron Goetzel’s Koop Committee was also snookered, It took us about 2 minutes to figure out that the alleged rate of cancers would have been roughly 50-100 times that of Love Canal.  You could come up with this insight too, using ingredients you already have in your kitchen: an internet connection, a calculator, and a triple-digit IQ.)

But two years later – after (1) we told them this was wrong; (2) we “outed” them in the Wall Street Journal; and (3) HFC admitted right in the Omaha World Herald they made up the claim – this statement is still being made.   We must now reluctantly conclude WELCOA is deliberately lying, because nobody, not even WELCOA, could be this stupid accidentally.*

Even Ron Goetzel briefly stopped defending WELCOA and HFC.  He claimed at the Datapalooza conference in June 2014 that the reason they won his award was due to a technicality. Apparently,  because they had only disclosed this particular lie on their website and not in their award application itself, it didn’t count against them.   Even so, a few months later, the Datapalooza conference being a distant memory, Ron once again declared that WELCOA/HFC/Nebraska was a “best practice”:

There is too much to say about WELCOA for a single posting, so we would direct you to two places.  First, in This Is Your Brain on Wellness, WELCOA merits its own entry, of course.  But WELCOA, truly a target-rich environment, also proffered screenshots for Midland Health, Bravo, Balance, Well Nation, the Healthy Company Alliance, Trotter, and Star Wellness.

Second, you can find Chapter 7 of Surviving Workplace Wellness right here.  Even in the target-rich environment of the wellness industry, getting one’s own chapter is quite a feat.  Just to get you in the mood, here is the first paragraph of that chapter:

Now that we have your attention, you can click on this link and download Chapter 7, with our compliments.

*Our bad!  It turns out WELCOA may very well be this stupid accidentally.  You see, when we pointed out in Surviving Workplace Wellness that they had misspelled the name of their founder, they fixed it on their home page.  (Apparently, while many people can spell and many people have visited their home page, the intersection set consists only of us.)   But it never occurred to them to do a find-and-replace.  You’d think that someone there would have thought: “You know, since we didn’t spell Buffett correctly on our home page, perhaps there are other places we didn’t spell it correctly either.  If only there were some way of testing that hypothesis…”

And that one of WELCOA’s other luminaries maybe couldn’t spell “Buffett” either but had studied the intricacies of Word’s find-and-replace function.  And that maybe — just maybe — these two folks would have bumped into each other, like in those old Reese Cup commercials, and collectively come up with the insight that the “answer” was: run the find-and-replace function on “Buffet.”

But no such luck.  Hence to this very day, the original spelling still appears on their website, in that very same Nebraska case study.

We’ve just spent 1350 words observing WELCOA’s foibles, but we do like to be balanced in our reporting, so we’ll close with some good news.  The good news is, there is indeed one place where WELCOA is undeniably right:  WELCOA truly has “helped influence the face of workplace wellness in the US”…

…By putting a great big smile on it.