The Graco-Goetzel-Bravo-Hopkins case study is turning into another Nebraska fiasco.  As with Nebraska, the numbers all contradict one another.  But unlike Nebraska, there has as yet been no admission of deliberate lying in the Graco case study. That’s why Graco only earned an honorable mention in the Koop Awards, instead of winning one outright like Nebraska did.

Consider Bravo’s case study on Graco covering the exact same population over the same period as Ron Goetzel’s study.  Let’s assume Ron Goetzel is right in that the wellness program should be measured from 2009 rather than 2008, when the program started.  (Bob Merberg’s brilliant analysis points out the cherrypicking of the date has a huge impact on claimed success, but let’s concede this start date choice to Ron, and use 2009 according to his wishes.)

Bravo’s case study displays the PMPM costs by year.  The first thing to note is, they list employee healthcare costs at $328 PMPM, which actually makes sense, instead of the $190 PMPM in the Hopkins report.  I don’t know why these two figures, purporting to cover the exact same population in the exact same period, are completely inconsistent, but I do know that $190 PMPM is an impossible figure, as any population health expert knows.  (“Plausibility checking” would have caught that error but Ron has never taken our course in Critical Outcomes Report Analysis, which would have covered plausibility-testing and likely prevented him from making such a rookie mistake.)

Second, Bravo lists children’s healthcare costs in this report as well.  Funny thing:  over the same exact period in which Mr. Goetzel was claiming that the wellness program was responsible for controlling employee participant costs, children’s healthcare costs trended better than wellness participants’ costs.   Mr. Goetzel obviously had access to this children’s cost trend data (we had no trouble finding it, thanks to Bob Merberg) but elected to — get ready to fall out of your seats — ignore it.  The wellness ignorati rarely step out of character. 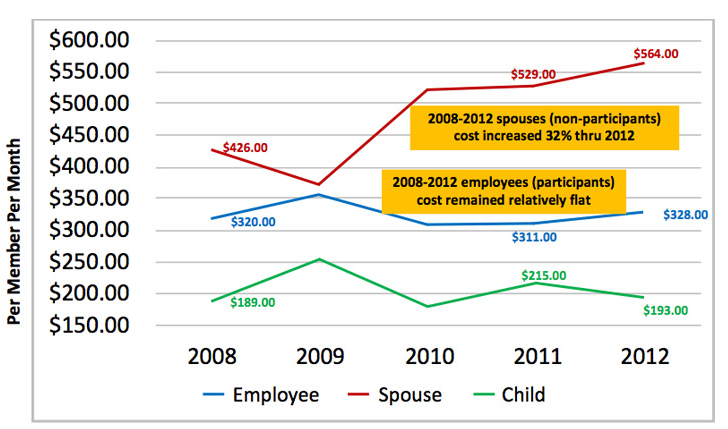 For some reason Graco’s spouses cost about $7000 apiece a year.  We’ll leave that for someone else to dissect.

As an aside, if anyone thinks they recognize the name “Bravo Wellness” from an earlier posting, it’s because they do.  Bravo is the outfit that brags about their ability to save employers money by fining employees.  Their website is disproportionately about their appeals process when those fines are levied.  This sounds like a company that does wellness to employees instead of for them.

Not sure how bragging about fining employees is consistent with the positive culture that Mr. Goetzel says Graco has, but maybe I’m missing something here.

In the immortal words of the great philosopher Britney Spears, oops, they’re at it again.

How this “study” gets published and why Johns Hopkins would allow its name to be used on it is anyone’s guess.  In our last posting, we pointed out that in one place Graco’s employees cost $11,100 apiece to insure, just like other companies that offer competitive benefits.  Yet later on in the story we see that employees only cost $2280.  No mention of how these figures could be so inconsistent.

We let the rest of the study go, figuring we had already found the Macguffin.  Ace reporter Bob Merberg, though, was not so easily convinced.

We’d urge reading his blog.  Among the claims made by Mr. Goetzel was “revenues have doubled since 2009.”  Well, yeah, but:

(1) it turns out Graco made a sizable acquisition in 2012, which might have had a teeny-weeny effect on revenues;

(2) revenues had plummeted in 2009, the year after the wellness program was introduced.

If you (a) measure from 2008, the year the wellness program was introduced, instead of cherrypicking the baseline year to give the best result, and (b) factor out the acquisition, revenues over the 2008-2014 period have pretty much tracked the economy as a whole.  So nothing happened.

Try the Quizzify demo and see how many you get right.

We can’t make this stuff up.  Fortunately we don’t have to.

Ron Goetzel reports on Graco, the company with the country’s most expensive spouses

Talk about “burying the lead.”

Ron Goetzel just reported on a company called Graco, where employees were subjected to a “pry-poke-prod-and-punish” wellness program.  These are line employees in an “old economy” company–exactly the type of company where healthcare spending would be high.  And it is high.  According to the article, Graco spent $29,000,000 on healthcare for 2600 employees. That’s about $11,100 apiece, roughly what you’d expect. This estimate is with or without a wellness program, since as Ron’s recent HERO report noted, wellness programs have no positive impact on spending.

Yet later on in the article he writes:

In the immortal words of the great philosopher Rick Perry, oops.

$190 per member per month (and we assume that he meant just for employees, not members) is $2280/year/employee.  Here are the possibilities:

(1) Graco has the country’s mot expensive spouses, costing about $18,000/year (to bring the average spend to $11,000 per employee contractholder per year) but hasn’t noticed

(3) Ron Goetzel made yet another rookie mistake in his math, thus invalidating the entire study, just like most of his Koop Awards.

You can rule out that this $190 had anything to do with the wellness program.  Smoking rates (the only thing that really affects spending) remained unchanged, and obesity only fell a few points.   And a company can’t save money by overscreening people, paying for their drugs, and making them get unnecessary checkups.  In any event, it wasn’t $190/month.  It was $11,100/year.

$2280 vs. $11,100…  We look forward to Mr. Goetzel’s explanation of how both these figures could be true, since it appears they are completely at odds with each other.  In the immortal words of the great philosophers Dire Straits, if two men say they’re Jesus, one of them must be wrong.

And once again, the mantra of Surviving Workplace Wellness holds true:  In wellness, you don’t have to challenge the data to invalidate it.  You simply have to read the data.  It will invalidate itself.

Here’s a Quizzify number that adds up: a 100% guarantee you’ll save money

We will no doubt be accused of “bullying” him for invalidating this study, which he obviously spent a lot of well-compensated time on.  So just to show our good intentions, we will offer him our course and certification in Critical Outcomes Report Analysis gratis.  It seems he could learn a lot from it and we look forward to announcing his successful completion.

Update: Ron apparently “forgot” to include the actual data in his writeup, which showed that, um, how to put this tactfully, his entire conclusion is wrong. Looks like kids (who had no access to wellness) trended better than the adults who did have access. We added this as the second installment.