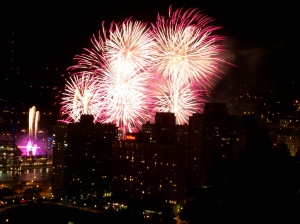 The eighth in the series deconstructing the HERO Outcomes Guidelines, covering Page 14. The full series can be found here. This installment in particular should be read in conjunction with installment #4  This Grand Finale will be presented in 3 parts…with a downloadable tool to help you calculated your wellness program savings as part 3.

PART ONE: HERO ACCEPTS OUR METHODOLOGY

So imagine our disappointment when one of their methodologies, the sixth of the seven listed, turned out to actually be valid. No surprise — this is the methodology I invented. Also no surprise given the industry’s standards for integrity, they didn’t acknowledge that particular factoid anywhere in their 88 pages. (And yet they accuse us of being impolite.) Here is the screen shot. 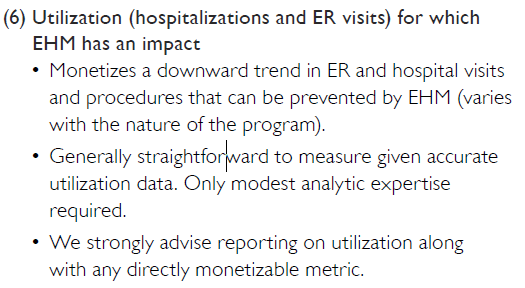 The philosophy of #6 is quite straightforward. If you were introducing a flu vaccine program, you’d measure the reduction in number of people who got the flu. If you offered a new program for conservative treatment of meniscal tears, you’d measure the reduction in the number of people who had meniscal surgery. That’s the way experimentation works. You hypothesize an outcome that the intervention should create…and then you measure that outcome to see if the experiment worked.

Except, of course, in population health, where any improvement in anything (cost, trend, utilzation) gets attributed to any wellness program that happened to be in place. The masters of this would be Mercer. Mercer once “found” massive, mathematically impossible, savings for North Carolina Medicaid’s medical home in a cohort that, as luck would have it, wasn’t even eligible for the medical home. And one wellness industry stalwart, Larry Chapman, says the simple act of completing a health risk assessment can reduce total healthcare spending by 50%, even when the information in the HRA is wrong, as is often the case.

And did you ever notice that when a company switches to a high-deductible health plan and adds some needle-poking, they attribute the reduction in spending to the needle-poking, not the fact that everyone in their company suddenly gets socked with a bigger annual deductible?

Enter wellness-sensitive medical event rates (WSMEs). This is the only methodology that tallies hospitalizations for conditions targeted by a wellness program – statistically avoided heart attacks etc. This is the only one of the seven HERO methodologies that would be acceptable to legitimate researchers. Hence, its use both in Health Affairs and by the GE-Intel Validation Institute. The former is the most respected health policy publication and the latter is the most (the only) respected outcomes evaluation organization.  Further evidence of its validity is that there is no mention of it in the leading wellness promotional publication, the American Journal of Health Promotion, perhaps because – as HERO has attested – it doesn’t show savings.

Even though it isn’t attributed to me in the HERO guidebook, I invented this methodology in 2007. This is incontrovertible. No one else had anything remotely close to it. Unlike the automobile, TV, the computer, etc., this was not one of a series of incremental improvements to or the amalgamation of existing technologies.

And none of the other invention clichés apply either. The Chinese didn’t invent it in 1000 BC. Leonardo DaVinci didn’t sketch it in 1541. The Germans and the Allies weren’t racing to develop it at the end of World War II. By contrast, I’ve been presenting on it and using it for validation since then (meaning 2007). It figured prominently in Why Nobody Believes the Numbers too, before being highlighted in Health Affairs and the Validation Institute. For a modest fee, the detailed how-to can be downloaded from our website, though a Reader’s Digest version appears below.

While a number of employers and health plans use it now, several health plans – more than coincidentally three of the highest-rated in the country (Harvard Pilgrim, Blue Cross of Massachusetts, and Providence Health Plans) – have been measuring hospitalizations for conditions targeted by wellness/DM programs since the methodology’s inception.

So needless to say I was surprised and totally flattered that the 88-page HERO Report contained no attribution to me as the inventor of the WSME plausibility test. As mentioned previously, the strategy of the Wellness Ignorati is to ignore facts (hence their moniker), especially including my very existence. That strategy reduces the likelihood that one of their customers might click through to the site. They aren’t much for our recommending that companies learn our helpful insights, which they call “bullying.”

The wellness industry has had a love-hate flip-flopping relationship with WSME measurement.

First, until 2013, the entire Wellness Ignorati, quite in character, ignored this methodology, which is a powerful testament to its validity.

Then, in 2013, that strategy took a body blow: the exact methodology was used in Health Affairs. You may recall the same thing happened with another epiphany of ours — the expose of the invalid Koop Award-winning Health Fitness Corporation fabricated results. The Wellness Ignorati completely ignored our whistle-blowing expose until it appeared in Health Affairs, when they were forced to admit we were right and the whole thing was made up, or to use Ron Goetzel’s phrase in the passive voice, “was unfortunately mislabeled” for four years.

But then he un-caved. Once the Health Affairs storm had passed, he invoked the Sergeant Schultz defense. In December 2014 he said: ,

He may have just forgotten in December that he reviewed them in September. But in March he and his colleagues re-remembered wellness-sensitive event rates, and put them right in the HERO report, for which we are immensely grateful.

Hopefully they won’t re-forget in June. (Their memory appears to be correspond with the change of seasons.) Hopefully instead, to paraphrase the immortal words of the great philosopher George Gershwin, our methodology is here to stay.

How do I feel about HERO rewriting history so that I am no longer the inventor of this methodology? Honestly, having firmly staked out a niche in the small but growing “integrity segment” of the wellness industry, I prefer them staying out of that niche as long as possible. So I’m glad they show no interest in facts.

In part two, which we will post in a few days, we will explain how we do WSME plausibility testing and why it’s the essential method for assessing the impact of your wellness and disease management efforts.