This posting should be read in conjunction with Part 2 of the proof that wellness doesn’t work, which in turn links to Part 1 that shows mathematically wellness can’t work.

We explained how this wasn’t the case, and promised that we would post the analysis, so that he wouldn’t have to take our word for it. So here it is.

Since $11.3-billion was spent on these admissions in the private-pay population according to the wellness industry’s own HERO Report, these events would have had to rise by at least 60% in order to make the claim that the $7-billion wellness vendor industry broke even by avoiding them.  If indeed workplace wellness prevented this huge increase in the privately insured population, one would expect that these very same events would have risen by something similar to 60% in the non-privately insured population–meaning the combined Medicare, Medicaid, and uninsured.

As researchers might say, the privately insured population was “exposed” and the remaining US population was “non-exposed.”  As wellness spending snowballed, the separation between those two populations’ WSME trendlines should have increased significantly.

The graph below compares WSMEs — or what the HERO Guidebook refers to as Potentially Preventable Hospitalizations (PPH) — over this century, using the national Healthcare Cost and Utilization Project database. 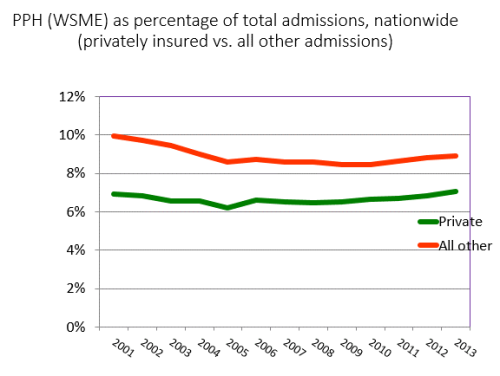 Likewise, the idea that wellness events have indeed fallen on an absolute basis in the employed population due to wellness is also a fallacy. These events have fallen even faster in the population not privately insured.

By whynobodybelievesthenumbers in Uncategorized on November 5, 2015.
← And the Envelope Please. The Goetzel-Lewis Debate winner was: Hey, How Come Wellness Needs an ROI But Real Healthcare Doesn’t? →