Rocky, Bullwinkle, Wellness, and the American Journal of Managed Care

Some of you might remember the closing credits of Rocky and Bullwinkle.  Due to copyright restrictions, we can display only a “fair use” snippet. (“Fair use” means you could use one question from Quizzify as an example without special permission as long as you cite the source, but if you tried to copy the whole thing, we’d get elected president, hire a special prosecutor, and throw you in jail.)

Rocky asks: “You got the credits, Bullwinkle?”

Bullwinkle replies: “All on this itty-bitty card…oops” and then it folds out:

So what does this have to do with wellness, besides nothing?

Simple –I just consolidated all the lies and harms of the Wellsteps/Koop Award into one itty-bitty posting for the American Journal of Managed Care blog.  And it also folds out — with links to all the other “smoking guns” in this scandal.  If you just want to forward one article around, that’s the one.

Kudos to American Journal of Managed Care for going where Health Affairs fears to tread, by posting the entire, unbowdlerized expose in all its sordid glory.  Indeed one would think the latter publication would show some contrition for having started this “pry, poke and prod” mess, by publishing the original Baicker propaganda — with no disclosure of the authors’ conflicts of interest or funding sources…and apparently also no peer review. This thing has been cited 250 times.  And that was after it was shown to have been made up. It has 549 citations in total.

Sadly, in addition to not being subject to any other regulations, wellness is not subject to Pottery Barn Rules. Health Affairs created this mess, but they don’t need to pay for it. Quite the contrary, the Health Affairs “impact factor” has probably been boosted more by this article’s 549 citations than almost any other article they’ve ever published.  And guess who has to clean up after them? 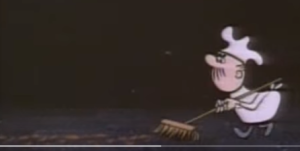 (Source–you guessed it–Jay Ward productions.  These are the closing credits to Mr. Peabody.)

Kudos also, by the way, to the perpetrators of the Wellsteps fraud — Steve Aldana, Ron Goetzel, Seth Serxner. They have the good sense not to take my bait by actually attempting to rebut. The one time they did, in Sharon Begley’s article, their “rebuttal” took the form of basically admitting they had made the whole thing up.

Abe Lincoln seems to be in the news a lot this week, and he put it best: “Better to be thought a fool and say nothing than to speak out and remove all doubt.”  Words the Wellness Ignorati should live by.  You’d think they would have learned that by now.

By whynobodybelievesthenumbers in Koop Award Invalidity, Uncategorized on October 11, 2016.
← Now is your chance to fight back against intrusive, coercive wellness programs! The “Great Debate” now out on tape! Part 1: Where’s the Beef, Mr. Goetzel? →