The Wellsteps Empire strikes back! CEO defends its harms to Boise employees

Steve Aldana, CEO of Wellsteps, finally defended his program for the Boise School District. It took him a while presumably because he had to retain a team of biostatistical consultants to discern the flaws in critics’ arguments against it.  After analyzing all the data, these biostatisticians were finally able to compile a list of the mathematical and clinical flaws in our apparently erroneous conclusion that Wellsteps harmed Boise employees and fabricated savings and raised lying to an art form.

I apologize in advance to those lay readers without a strong background in biostatistics. You may have trouble understanding the mathematical subtleties in Mr. Aldana’s arguments.  But I’ll repeat them verbatim nonetheless. According to Mr. Aldana, wellness critics are:

Leave aside his creative spelling and his mixing of cliches. Focus instead on his novel interpretation of Lavoisier’s law of conservation of mass, which states that nothing can be created out of thin air. Notwithstanding Mr. Aldana’s claim to the contrary, this law would seem to particularly apply to bovine excrement, the end result of a complex biochemical and physiological process, one which he would seem to have great familiarity with, as we’ve noted multiple times in this website. However, we encourage Mr. Aldana to try to undertake this endeavor, because at least his efforts won’t harm anyone, which is more than can be said for his wellness program.

Kudos to Dave Chase for posting the STATNews expose of the Wellsteps program, so that Mr. Aldana could respond. Mr. Chase, who is producing a documentary called The Big Heist on wellness and other healthcare ripoffs, is obviously goading Mr. Aldana into writing some material for him, and Mr. Aldana obliged.  Rather than create a news cycle, where the Wellness Ignorati inevitably lose, he should have followed the lead of Ron Goetzel and simply ignored me.  Indeed, if there is one thing that Ron Goetzel excels at, other than doctoring data and lying about outcomes, it’s ignoring me.

In addition to calling me a lier, he also called the author of the STATNews expose, Sharon Begley, a lier.  I won’t question the wisdom of alienating the media, but I would question whether someone of Ms. Begley’s impeccable credentials (listed here on her Wikipedia page) could possibly have received all the accolades and awards she has amassed for health/science reporting if indeed she couldn’t find all the obvious flaws in a Koop Award application.

The linkedin thread is pasted below and I’d encourage reading it.  Don’t make me beg. 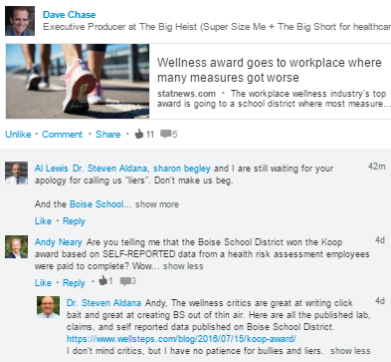