The most comprehensive expose of the “pry, poke and prod” industry is likely to have broken the 1000-download threshold by the time you read this.

Because TSW doesn’t lie (that’s part of the reason we are so unpopular amongst the HERO crowd and its sycophants), I would acknowledge that the methodology they use to measure popularity favors more recently published articles, and ours is “only” a year old. Even so it is quite a feat because, while we are close on the feels of #1, there is a big gap between us and the #3 article. 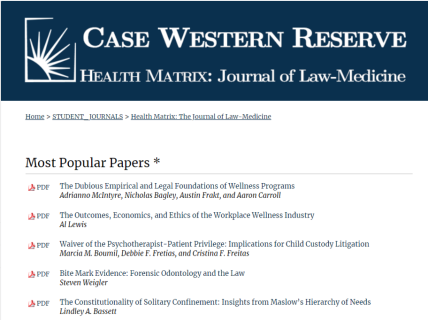 In the structured world of law, as opposed to the “Wild West” of wellness, there are rules. That’s why I chose the leading law-medicine venue for this expose.

One rule of evidence is that some of the best evidence — one of the few exceptions to the hearsay exclusion — is what’s known as an “admission against interest.” An admission against interest is “a statement by a party that, when uttered, is against the party’s pecuniary, proprietary, or penal interest.”  It’s even more compelling if it is captured electronically, as on a live mic, or in print.

The best example is Robert Durst accidentally admitting that he killed his wife during a bathroom break while being interviewed for a documentary, when he was still miked. You’d have to be, as Larry David might say, pretty pretty pretty pretty stupid to make admissions against interest when you are miked or in print.

And yet the wellness industry’s entire modus operandi is to do exactly that. All that remains is for someone like me to point these things out, take a screen shot (the equivalent of Durst being miked), and then sit back, make some popcorn, and watch them react. Reacting is also a form of evidence. Reacting the way a guilty person would react is prima facie evidence of guilt. (To use the examples from the TSW landing page, think OJ and the white Bronco or Lance Armstrong and just about anything he said or did after being accused.)

Needless to say, the wellness industry’s very stable geniuses never step out of character when it comes to guilty reactions. This runs the gamut. Sometimes, as with Bravo, they pull down the incriminating screenshot immediately after being outed. Or, as with Interactive Health, they simply excise the incriminating data from their “research report” and call it a “research summary.” (And also they try to bribe me not to talk about them any more. I’m just sayin’…)

Or, as with Wellsteps, they act out with unsupported and creatively spelled recriminations. 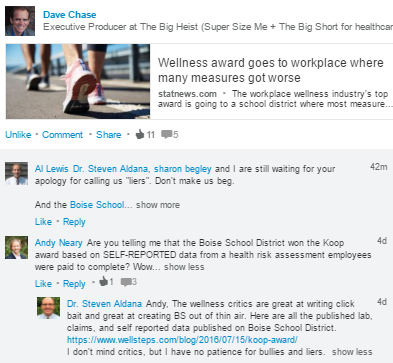 Or sometimes simply trying to erase history. This is the specialty of Ron “The Pretzel” Goetzel, twisting and turning his words to do exactly that, not realizing that we keep screenshots. Here is the “before” and “after” picture of him erasing the smoking-gun evidence that a program’s “impact” was due entirely to separation into participants-vs-non-participants rather than pry, poke and prod. Note that from 2004 to 2006, separation between participants and non-participants increased almost 20% — before there was even a program to participate in.

Before (what really happened): 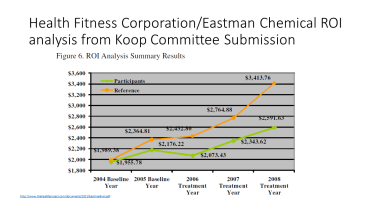 In order to maintain the fiction that participants-vs-non-participants is a valid study design, Ron simply removed the labels from the x-axis: 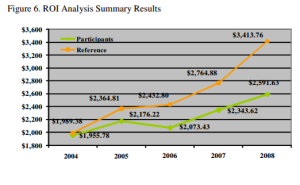 Lest anyone domiciled in a state where marijuana is now legal think the first one was a mistake and was corrected as soon as they noticed, they actually repeatedly reprinted and reused the original in many forums, like this one: 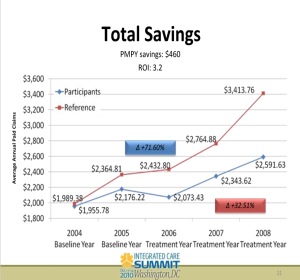 Sometimes, and this was my favorite of Ron “The Pretzel” Goetzel’s twists and turns, he literally rewrote history, in the form of forging a letter from the Governor of Nebraska, once he admitted the initial claim of saving the lives of 514 cancer victims was exposed as a fraud:

Here is your assignment: pass this along to everyone you know and ask them to read the article. Then hopefully it will be time to write the history of wellness the way it should be written. And keep a screenshot in case Goetzel tries to rewrite it.

By whynobodybelievesthenumbers in Uncategorized, wellness doesn't work on July 30, 2018.
← Wellness vendors foresee “Wild West of Litigation” in 2019 A Review of Netflix’ The Bleeding Edge →