Each of us delivers a rebuttal-cum-second statement.  Ron uses his time to shore up his base — the “low information voters,” as they say in political science–with claims he knows to be inaccurate because he himself has said the reverse and/or the statements are invalid on their faces.

As a reminder, the time stamps for each section below roughly synch to this master recording.

Employers also spend money on rare diseases, infections, catastrophic issues, sports injuries, trauma, drugs, and doctor visits for various things. Are you seeing a pattern here? None of these are preventable by wellness. Where does he get his ideas?

Tallying all spending according to Ron’s own co-authored report — and the HCUP database compiled by Ron’s own employer, Truven —  the rate of “potentially preventable hospitalizations” is 2.62 per 1000. Their report uses $22,500 as the average cost/hospitalization. Doing the math with the $22,500, that’s $59/per person per year, out of $6000/person or so spent on healthcare.  Meaning about 1% of claims would be preventable through “pry, poke and prod” programs. And that assumes these programs worked perfectly. As years of Koop Awards of demonstrated, they don’t work at all.  The most carefully studied program is Connecticut’s. Connecticut‘s pry, poke and prod program actually increased state spending on health care.

So Ron’s premise is utterly false. Let me put it another way: have you ever had a medical event that could have been prevented by completing a health risk assessment or eating more broccoli?

At this point his strategy emerges: argument-by-cliche.  “Most diseases are preventable,” is his favorite. That would mean health-conscious folks would be blessed with eternal life.

Also, “80% of money is spent treating chronic diseases.”  He is off by a factor of 80 from the relevant figure of 1%. He would arrive at that 1% figure if he asked the right question:  “What percentage of cost can an employer save with a perfect wellness program?”   He knows that because his co-authored guidebook says it. We also long since debunked this 80% myth.

As a public service, at the end of this posting we list the top hospitalizations. Remind us, Ron, which of these your wellness programs are going to prevent?

I am personally infuriated that he thinks my recurring bladder tumors were/are preventable.  I was involuntarily exposed to a carcinogen in 1984. He’s right about one thing, though: bladder cancer is usually chronic. However, most cancers aren’t, contrary to his claim. When was the last time someone said to you:  “My doctor says I have lung cancer, but we’re staying on top of it” ?

He also, ironically, lists “depression” as something that can be addressed by wellness without explaining how employers forcing employees to do something they hate — “playing doctor” by taking their blood —  is going to cure their depression.

“You can improve population health in the workplace if you apply evidence-based programs,” he says. And yet, his own Koop Awards, presumably given to the best programs, go to organizations that made essentially no impact on population health — 1%, 2% or 3% reductions in risk factors –-but then made up clinically and mathematically impossible savings figures.  [Postscript: I wrote that in 2015. Little did I know that in 2016, the Koop Award committee would give an award to a company that increased risk factors and admitted flouting evidence-based guidelines.]

Following the debate, Health Affairs put the total kibosh on Ron’s idea. They published a study showing that you can’t get employees to lose clinically or statistically significant amounts of weight. Not that it would matter because weight has only the most trivial impact on health spending in the <65 population.

Another irony (there’s that word again):  all the evidence — the US Preventive Services Task Force etc — says you shouldn’t screen all adults every year for anything other than blood pressure. And yet these Ron and his buddies advocate exactly that.

Ron’s business model is to write up studies showing his friends and clients save money on wellness, so he rattles some off. He notably leaves out Nebraska, because their program and his award for it were shown to be complete lies. However, leaving that program off this list (though it appears on most of his other “best practice” lists) is an excellent debate technique. Listing it as a best practice would have allowed me to point out the results were admitted to have been made up.

He also claims: “some organizations can actually achieve a positive ROI,”  As an endorsement, that’s right up there with Benjamin telling Mrs. Robinson that he found her to be among the most attractive of all of his parents’ friends.

It’s also a total walkback of his previous certitude, like:

Just like Gary Hart invited reporters to follow him to show he wasn’t sleeping around, Ron invited “everybody to go in and look at [the Koop Awards] to determine whether they are telling the truth or not.”  And, just like Miami Herald reporter Tom Fiedler did with Gary Hart, I took him up on his offer…and found that almost every award over the last five years showed provably fabricated savings figures. [Postscript: once again, I wrote this in 2015, before the Wellsteps award this year, which raises fabrication of Koop Awards to a plateau that even presidential candidates can’t reach.]

So Ron managed to lose his own rebuttal round–even when, as with his opening statement, I didn’t say anything.  The debate has pivoted badly for him…and it’s only going to get worse.

Postscript: At 37:28, he says people with “high biometric measures…are more expensive” than people without. This means he knows full well that Wellsteps is lying in their 2016 award when they show increased biometrics but massively reduced costs.

As a public service to Ron and his cronies, I am listing the top 25 hospitalizations in order of spending. See if you can find one or two that are “preventable” by eating more broccoli or being poked with needles. 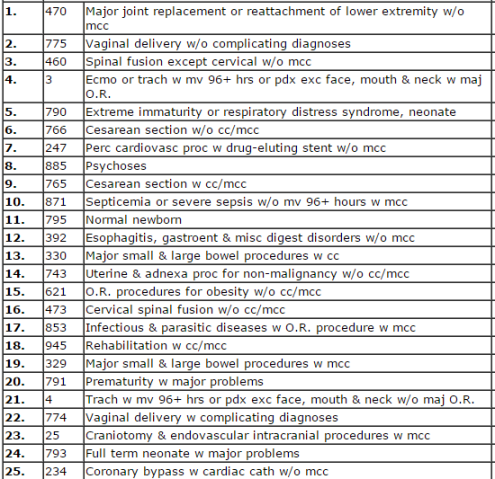