We’ll go walking out
While others shout of war’s disaster
Oh, we won’t give in
Let’s go living in the past 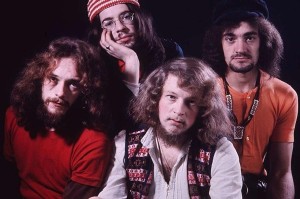 A delegation from the Validation Institute attending the World Health Care Congress time-traveled over to the US Chamber of Commerce Monday to watch Ron Goetzel and a few acolytes try to re-create the shiny new wellness object from the 1980s. Just like in the 1980s, the theme was, and these are the exact words of one of the speakers: “Why aren’t more employers seeing the value in wellness?”

Um, because there isn’t any? 7 years after I first proved, and guaranteed, that none of this “pry, poke and prod” nonsense could possibly add up, the evidence has finally caught up with the conclusion.

Of course, there is value in wellness done for employees, rather than to employees. And far be it from me to discourage anyone from being screened according to guidelines.  But that’s not what the US Chamber is all about. The US Chamber is about pressuring the EEOC into restoring the punitive “voluntary” wellness penalties that a federal judge put the kibosh on in December 2017, effective this year.

The irony is, the Chamber is its own worst enemy. If the EEOC ever got hold of a recording of that session, it would constitute an irrefutable argument for the EEOC not to change the rules. The speakers other than Ron were all about improving employee well-being through autonomy, independence, responsibility for projects from beginning to end, and creating a culture of health.  All those are worthy goals. Goals which, more than coincidentally, have nothing to do with screening the stuffing out of the workforce and penalizing employees 30% for not losing weight. (Shame on Oprah Winfrey!) Quite the contrary, any organization trying to achieve those goals would never dream of manhandling their employees like that.

Ron Goetzel: Katherine Baicker is living in the past

If a fortune-teller had predicted the following as recently as three weeks ago, I would have demanded a refund: Ron Goetzel dissed Katherine Baicker., Specifically, he accused Professors Baicker and Song, along with BJ’s and their vendor, of “doing a program out of the 1980s,” saying that their outstanding study could safely be ignored. (These are the same 1980s in which wellness, according to its promoters, couldn’t fail.)

What horrible 1980s elements did the BJ’s program have? Coaching, screening, learning “modules” and HRAs. Of course, no one has included those things in a wellness program for at least 30 years. (not)

Curiously, Ron didn’t have any issue at all with Baicker’s original 2010 “Workplace Wellness Can Generate Savings” article, which was chock full of programs literally from the 1980s. Only 2 of the programs analyzed in that study were conducted in the 21st century.

If that fortune-teller had also predicted that Ron would start telling the truth someday, I would have demanded double my money back. But no fortune-teller would ever predict that. Fortune-telling industry malpractice insurers will no longer cover lawsuits arising out of that prediction.

And for good reason. It’s generally a safe bet, given Mr. Goetzel’s tenuous grasp on integrity, that he’s going to misrepresent something. Yesterday, as is his wont, he deliberately misrepresented the position of The Incidental Economist (TIE) on the subject of wellness. He quoted TIE as saying that wellness “usually” doesn’t save money. (As a sidebar, I’d note that it is a bit of a head-scratcher that even the misrepresented TIE position makes Goetzel’s position look bad.)

Perhaps I need new glasses, but  I can’t seem to find the word “usually” in the most recent TIE article on wellness savings:

We’ve said it before, many times and in many ways: workplace wellness programs don’t save money.

There’s another reason Ron doesn’t quote TIE, which is they completely dissed him and his Koop Award friends in that article. Totally worth a read.

According to Ron, only 100 programs work and thousands fail. (“That’s not an industry,” I observed in our debate. “That’s a lottery.”)

So how do you succeed? How do you avoid programs “from the 1980s”? Maybe you avoid that by using a vendor where Ron has a “strong working relationship,” like Vitality. And just to be on the safe side, maybe you report only the results from Vitality’s own program for Vitality’s own employees. That way you can’t fail…

…and yet fail they did…

Even with the investigator bias and self-selection and “home court advantage,” Vitality employees got 2% fatter and their eating habits got worse after being coached.

Although maybe that counts as a success in the wellness industry, because employees weren’t too badly harmed, as they are in a typical Koop-Award winning program. Congratulations to Mr. Goetzel!

By whynobodybelievesthenumbers in Uncategorized, wellness doesn't work on May 2, 2019.
← A feel-good wellness story for a change Wellness: It’s time to believe the research, not the “experts.” →