This is the sixth in a series on the HERO disinformation campaign around wellness ROI.  The other six installments can be found here.

This afternoon HERO and Ron Goetzel conducted an entire Groundhog Day-type webinar as though They Said What, the entire media, and 2015 don’t exist. 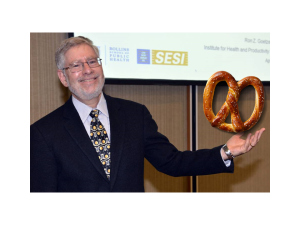 Time to make the pretzels

Here are some of the things they are still saying, that they know to be somewhere between misleading and lies. Apparently Mr. Goetzel lived up to his billing as Goetzel “the Pretzel” by basically twisting  “wellness loses money” into wellness makes money,” though he admitted to some “controversy” around the latter point.

First, he is still quoting the Kate Baicker 3.27-to-1 ROI, that he knows to have been thoroughly discredited.  We’ve blogged about that extensively–this link will take you to a series of other links.  To wit:

Second, the Ignorati are still quoting the American Journal of Health Promotion meta-analysis and Mr. Goetzel pretzeled his way around the accidental conclusion of that paper that high-quality studies show a negative ROI.

Third, Mr. Goetzel strongly criticized the Penn State fiasco.  Hmm…maybe we’re mis-remembering this, but we seem to recall he was one of the leaders of that jihad. Here is a article about a meeting in which he and several others “take the offensive” in the controversy.  Or maybe that was another Ron Z. Goetzel.

Fourth, he said: “There’s some healthy debate going on.” But the irony is, there is no debate.  Partly this is because they are steadfastly refusing to debate.  And partly this is because there is nothing to debate–they admitted “pry, poke, prod and punish” wellness loses money and damages morale.  The only places we disagree are how much money gets lost and how badly morale is damaged.

Sixth, he pretzeled RAND’s Pepsico analysis in Health Affairs, overlooking the fact that the study concluded wellness loses money.  Obviously we wouldn’t have congratulated Dr. Mattke on his huge success with that article (#2 article of the year in Health Affairs) if it had reached the conclusion Mr. Goetzel said it did.

Finally, the most notable feature was the dog-not-barking-in-the-nighttime.  Not once was there any rebuttal to our observations.  The Wellnes Ignorati have placed themselves in a difficult position.  In order to rebut us, they would have to acknowledge our existence. But ignoring our existence — and the existence of facts generally — is the core component of the Ignorati strategy.

By the way, our source, expecting a spirited rebuttal, instead got supremely bored by the insight-free recycled and invalid material in the presentation, and dropped off before the slam-bang conclusion to the webinar.  We doubt there were any other members of the Welligentsia on that webinar but if there were–and you have something to share about the closing minutes that you don’t see mentioned in here — please do.