When a true genius appears, you can know him by this sign: that all the dunces are in a confederacy against him.

If this list looks familiar, it’s likely because it largely coincides with finalists for the Deplorables Awards.  One exception would be Keas, though. They’re on Wellsteps’ best vendor list even though they no longer exist, likely victims of their own stupidity.  I will miss them though — if laughter were the best medicine, they would be the best vendor. You would, however, be better off contracting with a vendor that didn’t exist than with Wellsteps — at least your employees wouldn’t get worse.

Likewise, Provant is no longer with us. They drank themselves to death. (Water, that is — they insisted every employee drink 8 glasses a day.)

The law of averages did catch up with Wellsteps, though. They listed US Preventive Medicine, whose outcomes, almost uniquely in the wellness industry, are validated by the Validation Institute.

A couple of other quality vendors are listed too. I asked one how they got mixed up with these people, and he replied that he had no idea how they got on that list. Another vendor thinks the point of the list is to help Wellsteps with SEO, on the theory that these vendors, to show off this award, will link to Wellsteps, thus raising Wellsteps’ Google ranking. Let’s see how that’s working out for ’em: 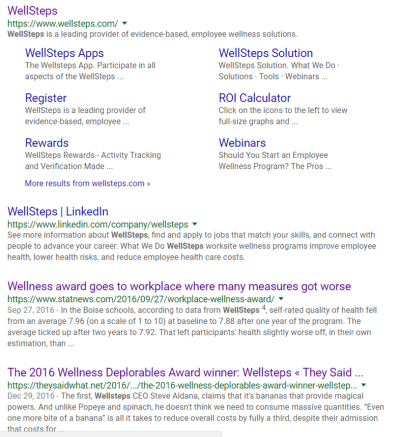 Likely Google ends up this way because no self-respecting, honest, vendor would deliberately link to Wellsteps. If they put Quizzify on this awards list, Quizzify would send a cease-and-desist letter. It would be a worse stain on Quizzify’s reputation than winning a Koop Award.

Another thing the Koop Award has in common with Wellsteps: Channeling Nero, they both bestow awards upon themselves. Look closely at that list: one of the best vendors named by Wellsteps is: Wellsteps.

One other observation: the very stable geniuses on the Koop Award Committee — which loves to give its board members and sponsors awards — are largely also mixed up with the Health Enhancement Research Organization, known as HERO. HERO rhymes with Nero. Coincidence? I think not. 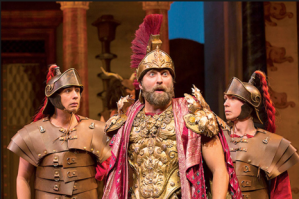 This is the second time Wellsteps has published this list. Since the list is unchanged, our write-up can be unchanged too. Below is the write-up from the first time they pulled this caper, the first Sunday in November of last year.

Wellsteps’ Steve Aldana has “endorsed” a confederacy of 25 wellness vendors, including his own company, Wellsteps.  Alas, in the world of the Welligentsia, in which an increasing number of employers reside, an endorsement from Mr. Aldana earns about as many points in a vendor selection process as neat handwriting.

There are usually not enough hours in a week to both do my Day Job running a fast-growing company (Quizzify, which plenty of thought leaders have endorsed, so we don’t have to endorse ourselves), and also play wellness-meets-whack-a-mole with the Wellness Ignorati. Fortunately, this week does have enough hours, thanks to the time change.  (The wellness industry is lucky that “falling back” is not a regular occurrence.)

I haven’t heard of many members of this confederacy, but I’ve heard more than enough about the ones below. Each link takes you to our own “endorsements.”

Keas Meets Lake Wobegon: All Employees Are Above Average (in Stress).  This is the best argument for requiring that wellness vendors attain a GED.

Provant: “In the Belly of the Beast” A nine-part series that one line can’t do justice to. We would simply note that you do not have to drink eight glasses of water a day. Indeed, you probably shouldn’t if you expect to get anything else done.

Staywell’s Wellness Program for British Petroleum is Spewing Invalidity.  It wasn’t just that their savings claim was mathematically impossible. That’s just the threshold for wellness savings claims. Staywell also somehow saved BP 100x as much as Staywell’s own website says is possible. And because they have a “special relationship” with Mercer (meaning they pay them), Mercer “validated” this fiction for BP, at BP’s expense…

Staywell and British Petroleum Meet Groundhog Day.  They won a Koop Award. Since Staywell and Mercer are both on the Koop Committee and their results are completely invalid and they are obviously lying, they satisfy all the award criteria.

Total Wellness’s Total Package of Totally Inappropriate Tests.  They could lose their license for subjecting employees to this panoply of US Preventive Services Task Force D-rated quackery, except that in wellness the only license you need is a license to steal from unsuspecting HR directors. This leads to…

…Total Wellness: The Best Argument for Regulating the Wellness Industry.  Total Wellness isn’t about to lose this Race to the Bottom without a fight. Watch as they try to out-stupid Star Wellness in their quest for that prize.

US Corporate Wellness Saves Money on People Who Don’t Cost Money.  We call this Seinfeld-meets-wellness, because it’s about nothing: even if you have absolutely no risk factors, these very stable geniuses will still save you a fortune. And someone should also tell them you can’t reduce a number by more than 100% no matter how hard you try.

Virgin Pulse. This outfit acquired ShapeUp, which gives harmful crash-dieting programs a bad name. Don’t take our word for it. It’s in the Pittsburgh Post-Gazette.

Vitality’s Glass House:  Their Own Program Fails Their Own Employees.  These people might have more luck selling you a crash-dieting program if they could get their own employees to lose weight.

Wellness Corporate Solutions Gives Us a Dose of Much-Needed Criticism.  We don’t want to spoil the punchline.

And that brings us to Wellsteps itself, which earns its “endorsement” from its own CEO by making so many appearances on this list that there is barely enough room for the rest of the confederacy. If you only have time for the Executive Summary, this is the one to read. But squeezing it all into one place requires sacrificing the laugh lines, and if there is one thing Wellsteps excels at, it’s providing laugh lines.

Wellsteps ROI Calculator Doesn’t Calculate an ROI…and That’s the Good News.  Watch what happens when Wellsteps meets Fischer-Price. No matter what variables you enter in this model, you get the same result.

Wellsteps Stumbles Onward: Costs Go Up and Down at the Same Time. This isn’t possible even using wellness arithmetic. Eventually Wellsteps solved this problem by simply deleting one of the slides. But because we long ago learned that doctoring/suppressing data is one of the wellness industry’s signature moves, we took a screenshot before we did our expose.

Prediction: Wellsteps Wins Koop Award.  In 2015, I went out on a limb to make this prediction, noting Wellsteps’ perfect Koop Award storm of invalidity, incompetence, and cronyism.

Wellsteps: “It’s Fun to Get Fat. It’s Fun to Be Lazy.” This one was penned by Dr. Aldana’s waterboy, Troy Adams, who apparently during his self-proclaimed “11 years of college” never learned that “fat” and “lazy” aren’t synonyms.  Paraphrasing the immortal words of the great philosopher Bluto Blutarski, 11 years of college down the drain.

Does Wellsteps Understand Wellness?  They are demonizing even the slightest consumption of alcohol, among many other misunderstandings. Shame on me for enjoying a glass of wine on a Saturday night!

The Back Story of the Scathing STATNews Smackdown of Wellsteps and the Koop Committee. This one leads to several other links.

The Koop Committee Raises Lying to an Art Form.  It turns out Steve Aldana is not stupid: he apparently has heard of regression to the mean, but just pretended he hadn’t so he could take credit for it with the Boise Schools, who were not familiar with the concept.

if Wellsteps Isn’t Lying, I’ll Pay Them $1 Million but let’s just say I’m not taking out a second mortgage just yet.

An Honorable Mention goes to another vendor on Wellsteps’ list, in the form of the Don Draper Award, for this advertising gem, aimed at ensuring that even the most stable genius HERO Board member can catch their name:

To quote the immortal words of the great philosopher Rick Perry, even a stopped clock is right once a day.* And, yes, on that Wellsteps list there is one standout vendor, US Preventive Medicine. It has validation from the Validation Institute.  As you read their validation, note that while they show an enviable reduction in wellness-sensitive medical events, they don’t claim an ROI. This is testament to the integrity of both USPM and the Validation Institute.

*If you are a regular reader and didn’t find this quote amusing, read it again. If you are a wellness vendor, find a smart person to explain it to you.